Maker/Problem-solver Steve Hoefer made an Arduino-based glove that can play Rock Paper Scissors. Why? Why the hell not! You think a nerd would pass up the opportunity to play with a computer? The glove has an accelerometer that detects when the user is shaking his fist to signify the beginning of a round. A flex sensor takes care of determining what move has been pulled off, i.e. whether you played rock, paper or scissors, and a layered edge-lit display shows what move the computer played. LEDs are used to show the score. 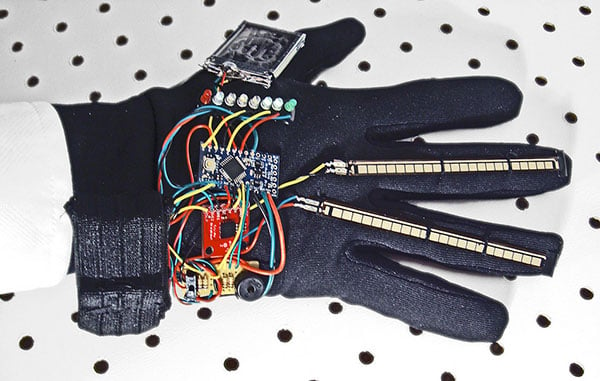 For example, if most of the time your opening move is Rock, then the glove will start using Paper as its initial move more often. Or if you usually play Paper twice in a row, then the glove will learn to play Scissors after your first Paper. It’s Rock Paper Scissors Championship Edition, and it seems that ironically, you’ll have a higher chance of winning if you don’t have a strategy and are totally random.

Tinkerers and hackers should check out Hoefer’s website for more details, as well as instructions, tips and the source code for the Arduino. Maybe you can build a glove that incorporates Lizard and Spock as well.