Living With the Hp Touchsmart 600: Part 3

So my recent journey with the HP TouchSmart 600 PC is coming to an end. But before I call it a wrap, I thought I’d share with you how the TouchSmart handles itself as a music playback and management system. 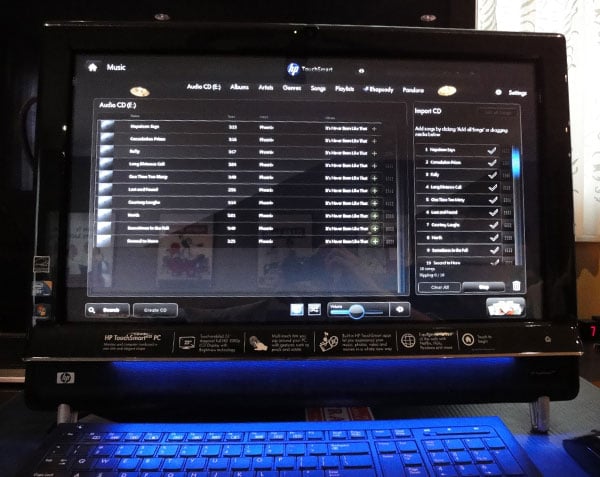 This is one area in which I think the TouchSmart software really shines, combining multiple music sources all in a single touch-based interface. At its most basic, the TouchSmart Music app can discover all of the music on your PC, and lets you easily browse through albums in cover flow, album art or text grid lists. And the software is capable of working with either the same library format used by Windows Media Center or iTunes, so you’ve got a choice if you’re migrating from an existing library. 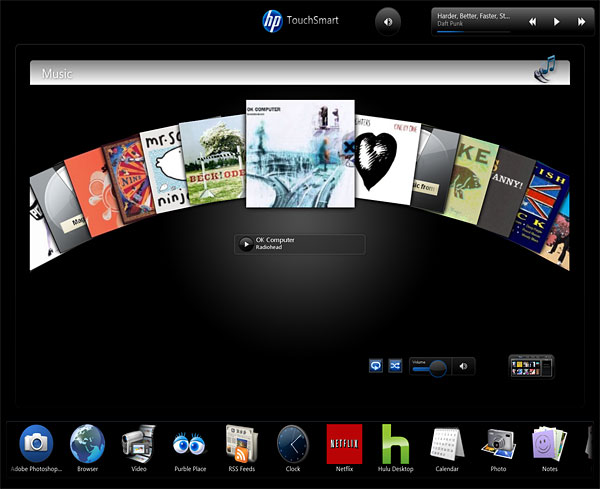 The TouchSmart Music app can run in the background while other TouchSmart Applications are running, so you can browse pictures, surf the internet, take notes, read recipes or even watch videos while you listen to music. But the really cool thing in the app is the relatively seamless integration with both Pandora and Rhapsody, both of which give you an endless music library. 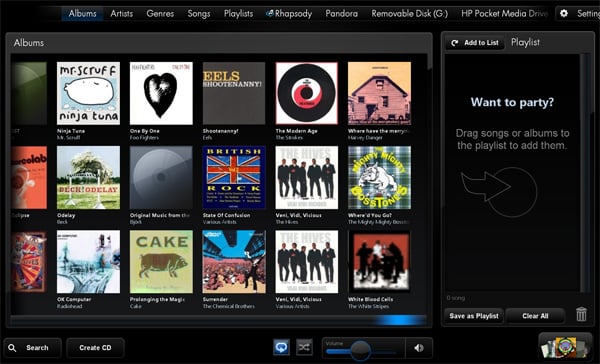 I’ll start with Pandora, as it’s the simpler of the two interfaces. Just log in with your existing Pandora account (or create a new one), and it pulls in any already existing artist mixes on the right side of the screen. You can choose to play individual artist-inspired Pandora playlist, or jump right to a QuickMix of all of your Pandora artists and related tunes. The left side of the Pandora interface features artist bios, related artist info, and is the one place you’ll see advertising in the TouchSmart interface. I kept getting ads for Wendy’s cheeseburgers, but your mileage may vary. And now I’m hungry. 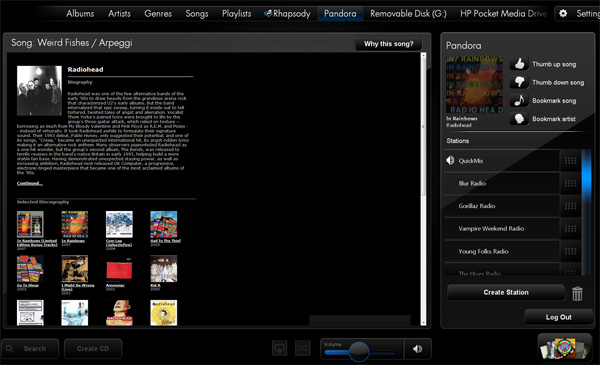 On the right side of the interface, you can thumb up/thumb down and skip music. One cool thing with HP’s Pandora is that you can put the Music app in the background, and all the artist info, ads, etc, go away and all you get is a small playback control in the upper-right corner of your screen with track and artist info. Of course, you’ll occasionally hear ads on Pandora, but what do you want for free? 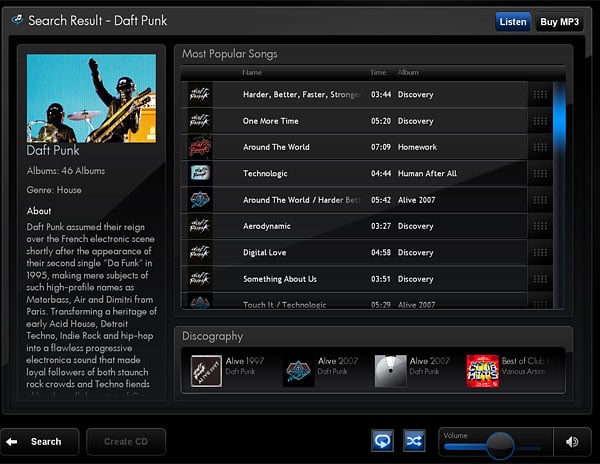 Rhapsody, the all-you-can-eat subscription music smorgasbord is also nicely integrated into TouchSmart Music. The Rhapsody store is available as an additional link in the header of the Music app, and with the appropriate subscription (currently $12.99 USD/month), you can surf and listen to all the music you’d ever want as if it were just part of your personal library. You can easily create playlists by just dragging the tunes you want from the left side of the screen to the right using your fingertip. 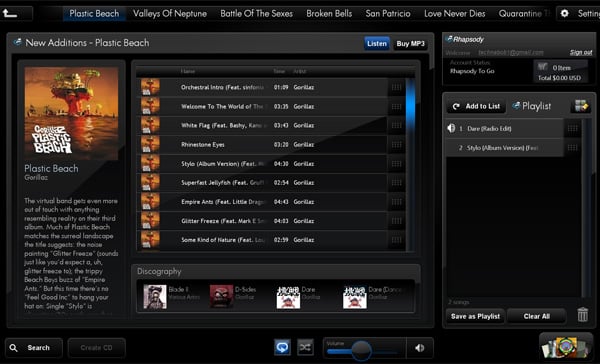 I had a couple of random issues with the Rhapsody service in which the album art turned up blank, but that seemed to be a transient issue, and is no longer happening. Other than that, the Rhapsody component worked flawlessly, and also supports background playback so you can do other things while the music plays. I also really like the Playlist Central area, which is great for discovering new music based on editorially-selected playlists. 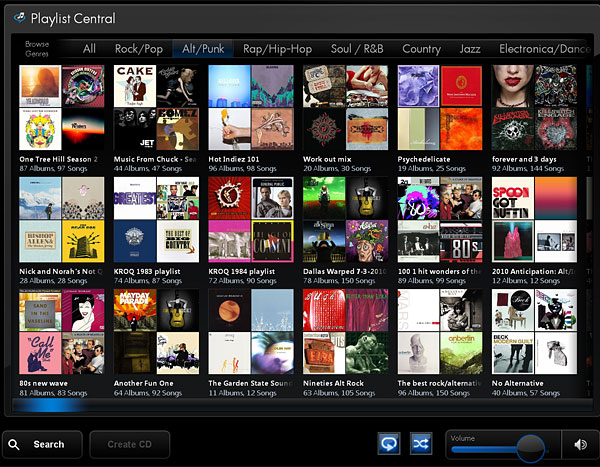 One other unique feature in all the TouchSmart Music apps is the touch-based search. Just write the name of the artist, album, song or keyword with your fingertip, et voila!… 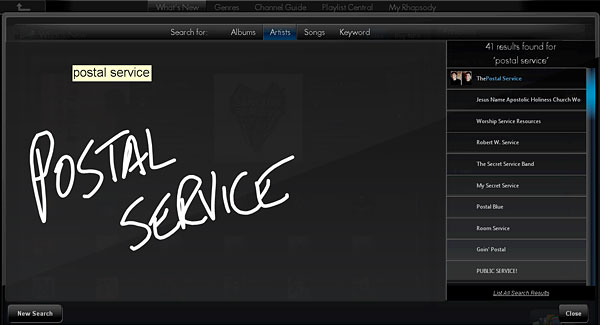 About the only thing not to like about TouchSmart Music is the fact that you can’t co-mingle playlists across your media library, Pandora and Rhapsody, but I’d definitely file that on the “nice to have” list. As is the case with video and Live TV, you can alternatively use the bundled Windows Media Center apps, but unlike Live TV, I couldn’t see any significant advantage over using the TouchSmart Music app unless you have a Zune membership. Personally, having the Pandora integration is what really made me a believer. I think I have Pandora running on some device of mine hours a day lately. 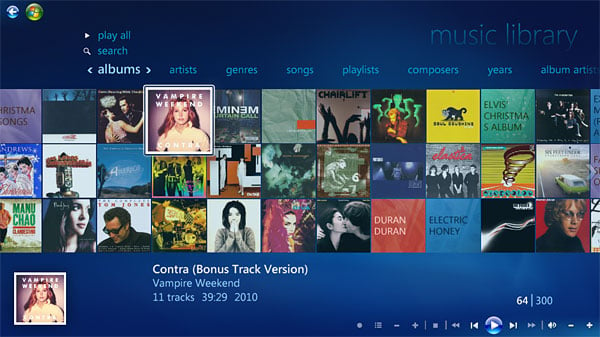 As I mentioned in the first part of this article, the TouchSmart has a completely admirable built-in audio system that’s more than sufficient for use in a small room. It won’t blow you away if you’re a serious audiophile, but if you don’t want to clutter your room with lots of wires and speakers, you definitely can get by without extra hardware. And there’s always the audio out ports if you want to use an external sound system. 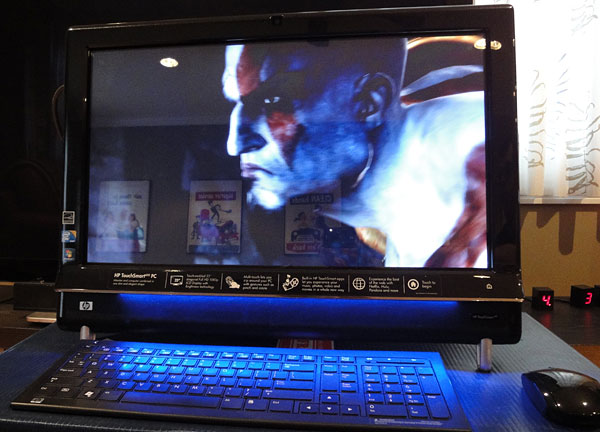 Since this is the final article in my three-part review of the TouchSmart 600, let me bring it all in for a landing. Overall, I’ve been very impressed with this hardware/software combo from HP. The all-in-one form factor is great for bedrooms, offices, and larger kitchens, and if you don’t want to have both a TV and a computer in those rooms, it’s a no-brainer. With a built-in digital HD tuner, 1080p video resolution, and robust media playback and management capabilities, you could definitely live with one of these as a standalone entertainment system. And the HDMI port on the side is a real bonus, since you can hook up a gaming console or satellite receiver and use it like an HDTV too.

There are definitely areas for improvement in the TouchSmart software,  specifically in the area of Live TV, where the playback and channel-surfing experience isn’t as smooth as Windows Media Center. However, there’s enough meat in the TouchSmart app suite – especially with the addition of Hulu, Netflix, Pandora and Rhapsody – to make it a compelling interface for day-to-day operation. And lest we forget that there’s an entire (reasonably) powerful Windows 7 PC packed in this box as well. You can surf the web, run productivity apps, play games, and do everything I’ve described in this series – all in a single slim box that actually looks quite nice sitting on your desktop. And while the touchscreen interface might not really be necessary (with the mouse, keyboard and included remote control), it still is pretty cool, especially for the media playback apps.

If you do decide you want to get your mitts on one of these, you can find the TouchSmart 600 over at Amazon with prices ranging starting around $1100 (USD) depending on configuration.

Or you could just enter our TouchSmart contest, and win one for yourself :)