While there are tons of DIY and homebrew analog synthesizers floating around the universe these days, this is the first time in a long while that I’ve seen an analog synth from a major electronic instrument manufacturer in quite some time. 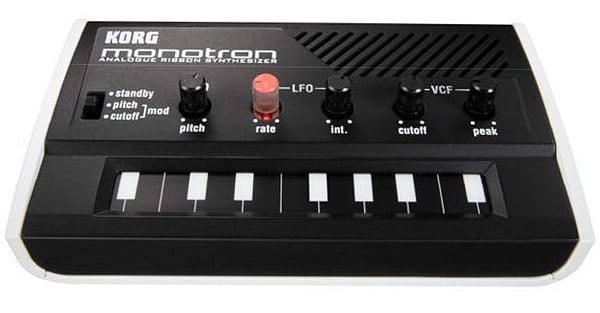 Revealed at this week’s Musikmesse show in Frankfurt, the new KORG monotron is designed to crank out buttery-smooth analog retro sounds in a compact package. The monotron offers up all the controls you’d expect from an analog synth, including VCO, LFO and VCF knobs, as well as a tiny ribbon keyboard for picking the notes you want to play. And because of the way that the keyboard works, simple finger gestures can result in effects like vibrato. There’s also an audio input that lets you filter external audio sources. As an added bonus, the monotron runs on two AAA batteries, and is small enough to hold in your hand. Here’s an incredibly short clip showing off just a tiny taste of the monotron’s sounds:

And if you’re really into retro sounds, you’ll be happy to hear that the monotron uses the same VCF circuit found in KORG’s classic MS-10 and MS-20 synthesizers, originally sold over 30 years ago. It should start shipping this May. Word on the street is that the monotron will sell for around €50 (appx. $67 USD).