Not to be confused with Guru Bhakti, the GuruBhakts are special robots designed to operate in a “follow-the-leader” mode. The ultimate plan for these ‘bots is to allow a remote driver to steer a single robot into a hazardous environment, and the other robots would follow in turn from that single set of actions. 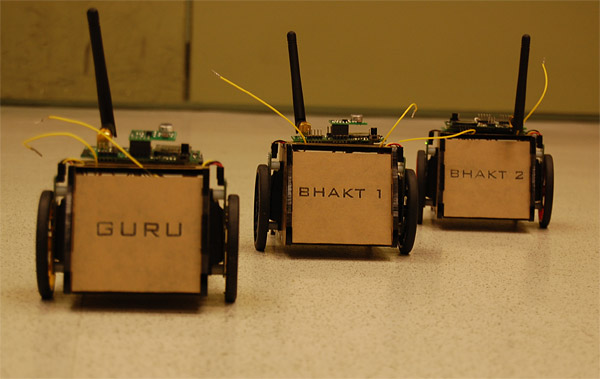 The compact wheeled robots were developed by engineers Saurabh Palan, Jitender Bishnoi and Rahul Khosla under the guidance of Professor Rahul Mangharam at the University of Pennsylvania for an embedded systems course. Basically, the way the little guys work is that the user holds the “MahaGuru” (a FireFly wireless node) in their hand, and hand gestures tell the “Guru” (leader) bot which direction to go. Then the “Bhakts” robots fall into formation and follow the Guru.

Simply tilting the MahaGuru to the left or the right sends the Guru in the corresponding direction, and his followers – like lemmings – fall in order. . 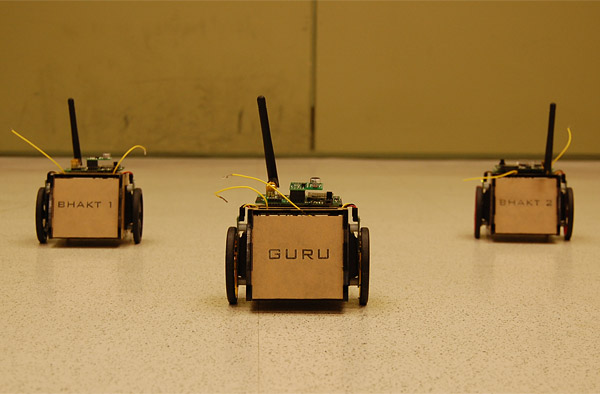 I wonder if you drove Guru off a cliff, would the Bhakts follow blindly, or would they recognize their own mortality and stop before they plunged to their demise?