Everyone expected a comic app for the iPad, and Marvel delivered. Marvel Comics for iPad is a lot like iTunes, combining a comic book store and a reader into one app. The reader allows for page-by-page as well as frame-by-frame scrolling, and there are thumbnails at the bottom that let users skip to any page. There seems to be no two-page view though, which may render two-page spreads useless. 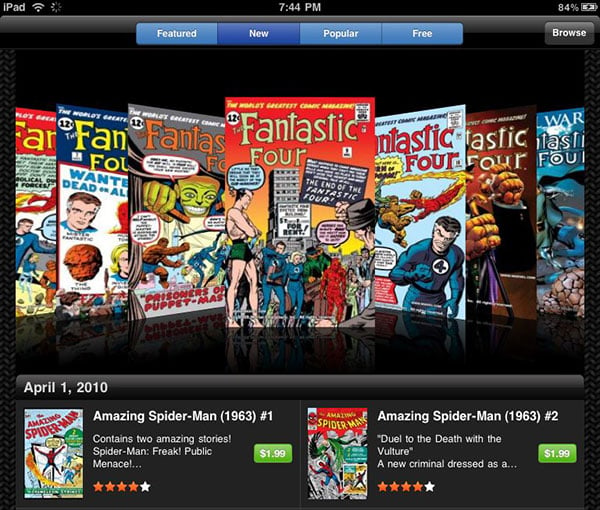 As you can see, some titles are priced at $1.99 (USD); Boing Boing’s Xeni Jardin says there are even free comics on the store. Here she is with her hands-on of the app:

Read more about the app at Boing Boing. While we’ve long been able to read comics on our computers, the integration of a book store into the app makes this a very good solution for both Marvel and fans. The former finally has a competitive alternative to unofficial comic book scans, while the latter now has an even easier way of getting comics.

I hope that Marvel includes some sort of buyback option, where users can “sell” their digital copies back to Marvel, basically deleting their copy in exchange for credit which can be accumulated and used to buy more comics. That way it’d be more affordable for people to try out new series and franchises.