Only the Japanese would make robot clones of themselves. Check out this latest robot by Hiroshi Ishiguro from Osaka University. Instead of cloning himself, which is what he did before, he decided to clone a woman. 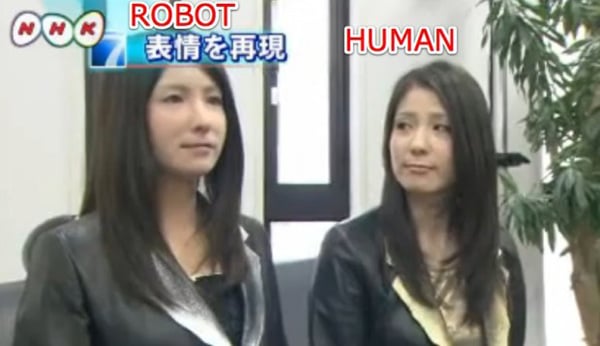 The Geminoid-F is pretty freaky, especially when you see the lady it was modeled after standing next to it. He plans on selling these clones for 10 million yen ($110,000 USD). I don’t know about you guys, but looking at her expression, she doesn’t look too happy with her clone!

The eerie doppelganger mimics facial movements with twelve pneumatic actuators, which allow it to smile and frown. The system works by using a camera that detects a person’s facial expression, sending the data to the robot, which behaves accordingly.