Hamilton claims that the Time Player watch was inspired by the fact that man used to believe that the earth was flat. So Hamilton made… a flat watch. A flat watch that displays the time in four different zones, and doubles as a pseudo-puzzle. 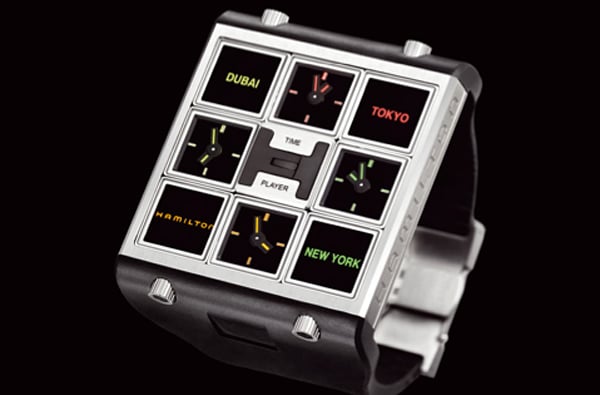 The tile in the middle of the watch is non-essential and can be removed, giving the user the option to slide around the tiles, like in those square tile puzzles (I don’t know what they’re really called, if those things even have a name). Hamilton also claims that the lines in the Time Player allude to the longitude and latitude. Ooookay.

One thing you need to know is that the words on the watch cannot be changed. You’re free to set each miniature watch to whatever time you want, but you’ll always have Dubai, Tokyo and New York there. Obviously I’m not too impressed with the Time Player, but if it fits your needs and your style, you can pre-order the Hamilton Time Player at HamiltonLAB; estimated price is $3,000 (USD).