It’s anyone’s guess why you’d want to rip apart your shiny new Wii-mote controller and make it looks like something out of the 1980s, but this is the DIY-geek generation, and where there’s a will, there’s a way.

This Japanese modder took two old Famicom controllers (that’s NES to you and I), and tore them apart. Once inside, he managed to cram the guts of his recently disemboweled Wii controller. Et voilà! The Wii Famirimokon! (Don’t bother trying to pronounce that.) 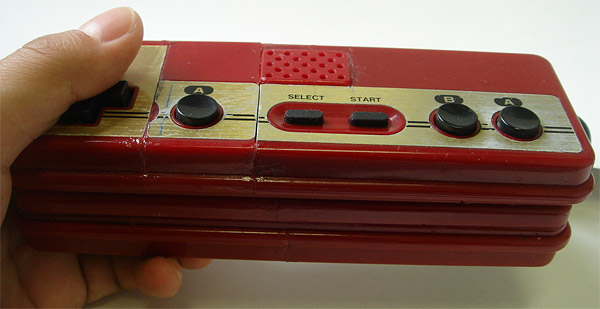 Sure, it’s not nearly as svelte from the side as it looks from the top, but whaddya want for a hack-job? Damned 3-dimensional space!

In keeping with the all-Nintendo spirit of the build, he also ended up having to use parts from a Game Boy Advance to connect parts of the controller. Why? Why the heck not. I’m just disappointed that he didn’t figure out a use for parts from a Virtual Boy or 3DS in there.

[via Tiny Cartridge via Go Nintendo]