Lok-It Secure Flash Drive: No Pin, No in

…or something like that. The point is, this flash drive is as secure as Maid Marian’s chastity belt. Other password-protected flash drives use software for authentication. Anyone who’s watched a Hollywood flick that involves computers knows that software can be easily hacked just by furiously typing on the keyboard until the big-ass “ACCESS DENIED” in bright red is replaced by an equally big-ass green “ACCESS GRANTED” on the computer screen. In other words, software can be hacked. That’s why, aside from using 256-bit AES hardware encryption, Lok-It’s flash drives have hardware authentication. 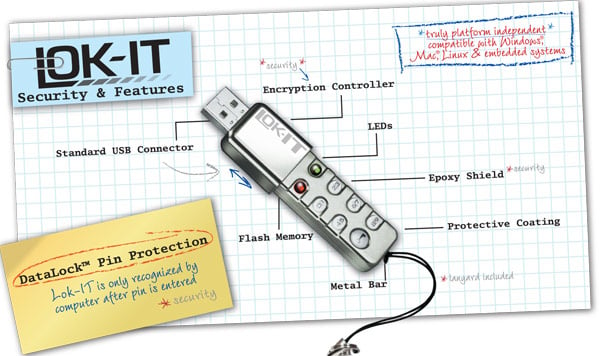 The guys at Lok-It sure know how to project security. I got absolutely nothing from that man’s presentation; his delivery was stealthy and possibly even spoken in an alien language. Check out Lok-It’s website for more information or if you want to order their flash drives.