This Man Hasn’t Eaten in 70 Years

…or so he says. The man you see below is Prahlad Jani. He’s being studied by India’s Defense Research Organization, because Jani claims that he hasn’t had anything to eat or drink in 70 years. The Telegraph says Jani is known as a breatharian, i.e. he only needs air to survive. He’s been under observation for six days, and so far has shown no signs of lethargy despite his extreme diet. Maybe he’s already dead and he just doesn’t know it. Just kidding. 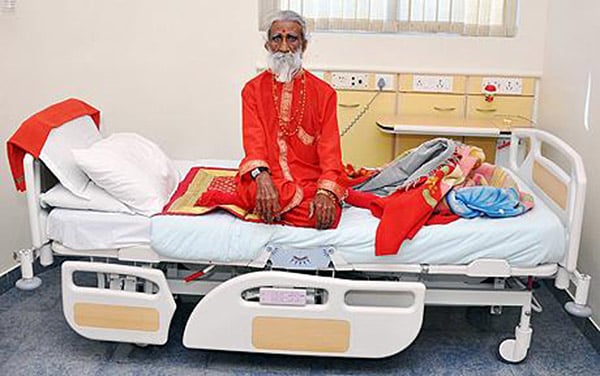 Jani claims that he is “sustained by a goddess who pours an ‘elixir’ through a hole in his palate,” while others deem him to be a fraud. Still, the Indian government is keeping an eye on him, in hopes of learning something that could help soldiers last longer on the battlefield or stranded victims of disasters to hold on while waiting for help. The article does say that Jani’s claim has already been put to the test once, in 2003, but people began doubting his claim when he started to lose weight after (only) ten days without food and water.