I probably couldn’t solve a Rubik’s cube in 25 minutes, let alone under a minute. However, this cool ‘bot can solve it in less than 25 seconds! Now how neat is that? Oh, by the way, it’s made out of LEGOs. 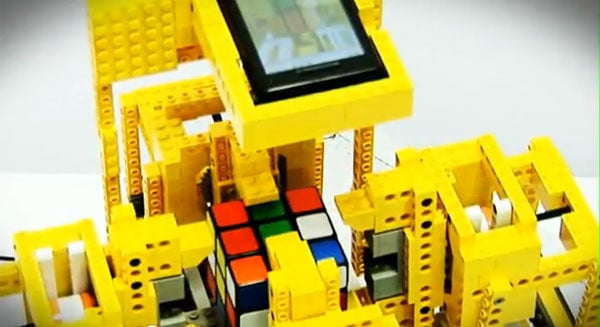 You read right, it takes this contraption 24.02 seconds to solve a Rubik’s cube. When I had one of these dastardly puzzles as a kid, I quickly decided that it was easier to just take off all of the stickers and glue them back on in the right order. This isn’t the approach that this robot takes, although I’d like to see them build one that does that too.

Created by David Gilday for ARM, the LEGO-bot solves the cube thanks to a custom application running on a Motorola Droid smartphone. This isn’t the first LEGO-based Rubik’s cube solver, but it’s the first that uses Android to figure it out.