I took my 8-year-old son to see Iron Man 2 last Friday, and he was all excited about it after seeing the action on the previews. We had only been watching the film for about half an hour before he asked me when it would be over and was ready to leave. We stuck the whole thing out though, and I can summarize it for you – boring, boring, fight scene from previews, boring, boring, set up for spin off Avengers, boring. 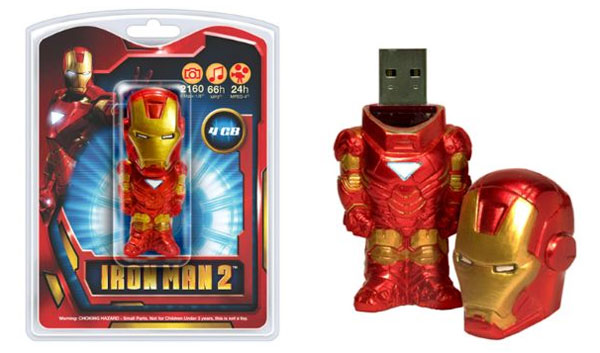 I can only hope that this Iron Man sculpted flash drive from Tyme Machines is more fun than the movie was. The drive starts at $34.99 (USD) for a 4GB version and can be had in 8GB and 16GB capacities as well. Doesn’t that sound exciting?

The head pops off the Ironman suit to plug into the USB port of your computer. I think the designer of the flash drive ripped off the Burger King commercial where the giant headed Burger King mascot is dressed like Iron Man, as the flash drive looks just like the King.