Polk Audio’s Atrium Garden Speakers are specially made for the outdoors, with “long throw” drivers that ensure that your music isn’t drowned or lost. The system is made of the Atrium Sat30 mid-range satellite speakers, and the big Atrium Sub10, a downward-firing subwoofer.

The Atrium Sat30 is aesthetically versatile – you can plant it on the ground, or hang it from its wires. They’re also pretty tough – Polk Audio claims that they can withstand “blows from weed whackers, mowers and other lawn equipment”, thanks to their shock-absorbing gasket. 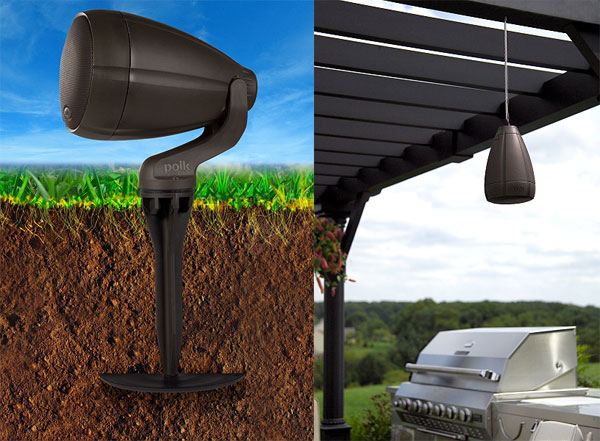 The Atrium Sat30 can be used without the Sub10, but this big fella is really the one which makes the system shine. It’s a 200-watt subwoofer with a 10″ “Long Throw” Driver. I guess it’s powerful enough to shake your plants off the ground. Like the Sat30, the Atrium Sub10 is weatherproof and tough. You can even use it as a stand, as it’s able to support objects up to 200 lbs. The Sub10’s surface is also paintable, so you can easily replace the chestnut brown color.