About a year ago Samsung revealed the LD220, a monitor that connects to computers via USB. I’m not sure if this is the same monitor, or if it’s an offshoot, but this is amazing nonetheless – a few days ago the Korean electronics giant showed off an 18.5-inch LCD monitor that not only connects via USB, it’s powered only by USB. 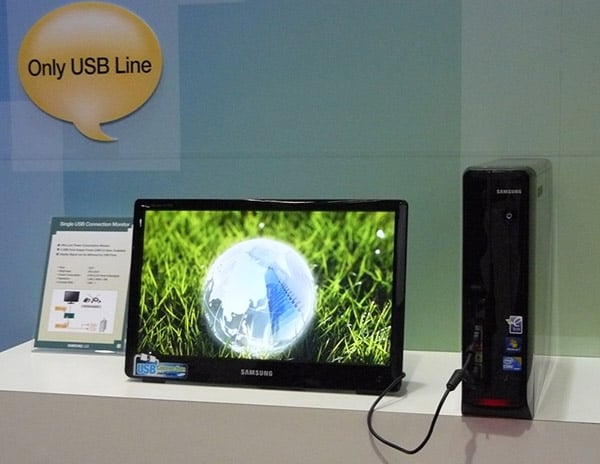 Samsung says that this was made possible “by improving the transmittance of the panel and the luminance efficiency of the backlight”, taking the monitor’s power consumption to as low as 6.3-watts. I didn’t understand what I just wrote but it sounds awesome.

This isn’t just some conceptual product either – Samsung plans on releasing similar products by next year. If you look closely at the lower right of the image, you’ll see that the monitor currently takes up two USB ports. One other drawback of this monitor is that it’s “only” good for 30,000 hours, compared to 50,000 hours for conventional displays. If you ask me, both are just minor setbacks compared to the immense convenience that this provides. Samsung – putting the “Universal” in Universal Serial Bus. What an awkward slogan that is.