Black Fox Stealth System for Combat Vehicles: Invisible Tanks? Are You Kidding Me?

A company called Eltics has developed a stealth suite that can cloak “military vehicles, combat helicopters and even entire naval surface ships,” rendering them “invisible to thermal imaging surveillance sensors, targeting systems or missile seeker-employing thermal sensors.” The system, dubbed Black Fox, is relatively economical and practical as well, as it consists of computers, a camera and plates that are attached to the surface of the vehicle to be covered, meaning little to no modification needs to be done on the vehicle. I can imagine Hideo Kojima furiously writing notes on this one. 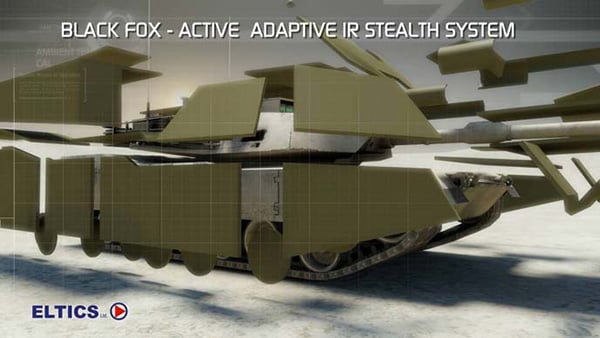 A Black Fox equipped vehicle will have a camera that continuously scans the thermal texture of the surroundings, which are then processed by onboard computers. The computers will then make the plates match the background scene, thus concealing the vehicle.  I’m obviously oversimplifying things, but I hope this is still as jaw-dropping for you as it is for me. Here’s a hilarious presentation from Eltics, with a cameo from Capt. Obvious:

“Now we are invisible, indeed.” The demo in the end of the video confused me a bit at first, and in case it’s got you stumped as well, watch it again and look at the background, and you’ll see that part of the car looks exactly like the background, such that the person’s waving hand seems to be floating in mid-air. I don’t know why they didn’t just cover the whole damn car with the plates. Below is a much easier comparison; just look at the Black Fox plate at the rear of the car:

Stealth add-ons? Fake thermal signatures? Sounds like the real world is finally catching up to video games. I won’t be surprised if someone makes a real Metal Gear. With stealth. Okay I’ll probably die from seeing too much awesome if that comes out.