It seems as if there’s a new Android-based tablet just about every day, so it’s getting hard to tell the difference between them all. Hard Kernel’s new Android 2.1 ODROID-T hopes to differentiate itself with superb HD video and gaming capabilities. 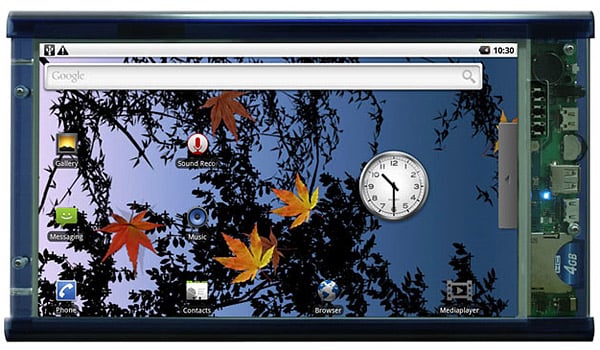 The tablet’s 10.1-inch capacitive touch screen offers 1360 x 768 resolution and HDMI video output. In this demo from the guys at ARMdevices, you get to see the ODROID-T cranking out beautiful 1080p HD video on an attached big-screen TV. There’s also a quick demo of a 3D racer, complete with accelerometer-based controls.

The tablet runs on Samsung’s PC 110 platform (ARM Cortex A8-based CPU), along with an SGX540 graphics accelerator, and looks like a pretty speedy bit of hardware, even if it is still in the rough-around-the-edges prototype phase. The platform developer edition is expected to ship sometime this month, but it’s unknown when a commercial version will be available.

For more details, head on over to Hard Kernel where they’ve got more demo videos of the ODROID-T in action.