Boy, I feel like it’s been a billion years since I even saw an 8-track tape, let alone listened to one. This kooky mod-job breathed new life into an old 8-track deck, letting it play tunes stored on an iPod. 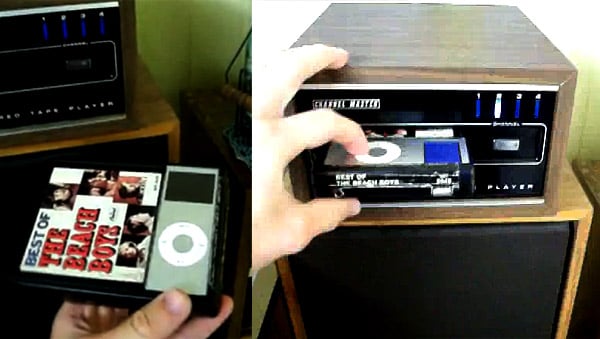 Modder themadhacker managed to rejigger the innards of this old 8-track cassette and wired it up so the magnetic playback head can play tunes from the iPod Nano docked conveniently inside of it.

Now I’m guessing the reason he decided to go with the Beach Boys tape instead of the Alice Cooper one was that he didn’t care too much about destroying Beach Boys music. I certainly wouldn’t have any issue with it. After all, Kokomo was probably the worst song ever written. School’s Out, on the other hand… It’s especially fitting that he’s cued up the Beach Boys to play Ozzy instead.

Anywho, I can honestly say that this is the first time I’ve seen an 8-track that can hold 500 songs. Kudos, madhacker!