Eagle Eye for the PS3: Play Fps Games the Way They’Re Meant to be Played

Gaming accessory maker Penguin United is developing a peripheral for the PS3 that will allow gamers to use both a keyboard and a mouse with the console. It’s called the Eagle Eye, and as you’ll see in the demo below, it works really well. It’s not without its faults though. 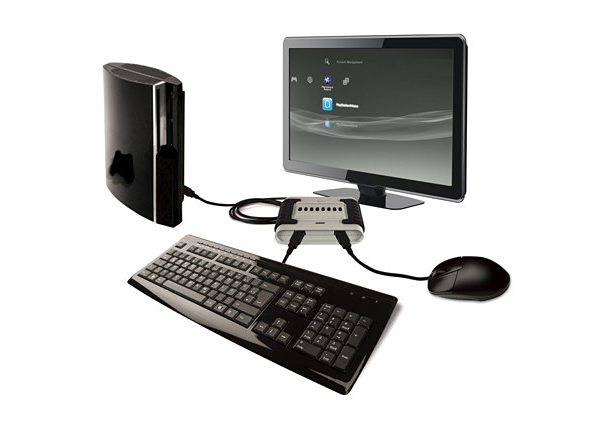 Eagle Eye comes with Windows-only setup software. You have to set up the key mappings on a PC first or else you won’t be able to use the converter at all. The video below shows how to set up the converter; of course you can skip straight to the second video, which is the actual gameplay demo.

If you’ve used gamepads or even emulators on a PC before, Eagle Eye’s setup shouldn’t be too hard to understand. The combo and turbo features will surely be popular among hardcore players. Here’s the gameplay video:

For a moment there, towards the end of the video, you can sense that the guy was really getting into the game. Good thing he remembered he was on camera. Anyway. It seems like the Eagle Eye is an awesome product, but I’m a bit concerned that there won’t be a way for users to re-map the controls or even just view which button does what while the whole thing is connected to the PS3. It’s not a dealbreaker, but it does mean that you’ll have to possibly take down notes about the key mapping you set up. Also, there’s a good chance that a control scheme that’s good for one game won’t be effective with another game. I’m not sure if the ability to save two control schemes will be enough to prevent users from going back and forth between a PC and the PS3 to set things up.

As the voice in the demo said, Eagle Eye will be available on July 2010, and it’s set to retail for $60 (USD). You can register at Penguin United’s website if you want to be notified when the Eagle Eye is available; you’ll also get a $10 coupon when they notify you via email.