More and more movies are getting video game tie-ins, but not many are as deserving of a video game counterpart as TRON: Legacy. Coinciding with the release of the movie, TRON: Evolution will also be released in Winter. The game’s story is said to be in-between the first movie and the new one, and it promises action-oriented gameplay, with some platforming and RPG elements mixed in, and of course it wouldn’t be a TRON game without light bike stages. 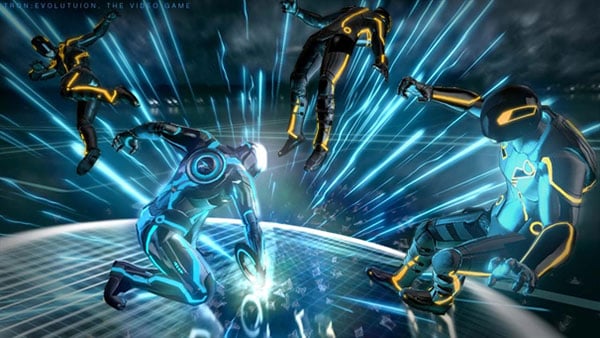 The cinematics of the video game come close to the minimalistic neon goodness of the upcoming movie:

But what about the gameplay? G4TV recently interviewed Darren Hedges, game director at Propaganda Games, the company currently working on TRON: Evolution. They also showed off some gameplay segments.

I don’t know about you, but the gameplay segment they showed was disappointing, mostly because the enemies are dumb – there’s one part towards the end when two of the bad guys get to Anon, and they just… stood next to him. I hope they fix that, because I’m really interested in seeing more of the capoeira-influenced moves and the different types of light discs that Hedges mentioned in passing. The story’s intriguing as well, since it’s supposed to be canon.

The light cycle segment looks freakin’ chaotic. I feel for the dude who demoed that thing live. Overall, I wasn’t impressed with what I saw. Then again there’s still quite some time before the game’s December 31 release. Amazon is already accepting pre-orders for the PS3 ($57 USD), Xbox 360 ($60) and PC ($40) versions of TRON: Evolution. Want more? Check out G4TV’s screenshots of the game.