Would an at-at From Star Wars Make a Great Pet?

While I’ve never thought of AT-ATs or Imperial Walkers from Star Wars as particularly cute, the following video definitely presents them as a nice robotic pet to have around. I can already see the animated version coming to a HDTV near you! 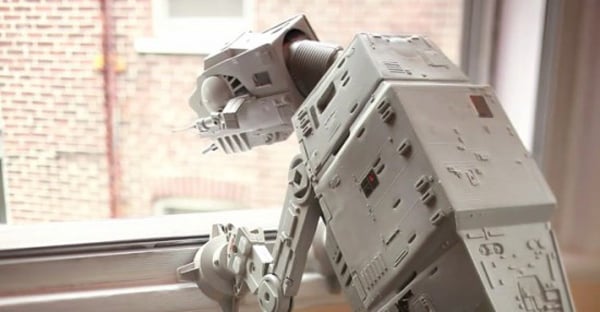 This amazing video from Patrick Boivin shows us what it would be like to have an AT-AT as a dog, since Patrick always wanted to have this Star Wars toy as well as a dog as a kid. He never got them, but he was able to make this great video when he grew up.

I was also a Star Wars fan growing up, and the toy that I really wanted, but never got was the large Star Wars frigates. One of my friends had them and they were huge. I never got them and I never had an AT-AT, but I had a dog for a short while. When I grew up, I bought myself a Slave 1, Boba Fett’s ship, which had always been a favorite of mine, even more than the Medical Frigate. None of those are as cool as this video.