Pranav Mistry loves creating new ways of using and interacting with computers – he was the one who created SixthSense, a portable interface which projects interactive images, not only intuitive and practical but cool as hell to use. Now he and colleagues Patti Maes and Liyan Chang have come up with Mouseless, a substitute for the mouse that – surprise – doesn’t use a mouse at all. 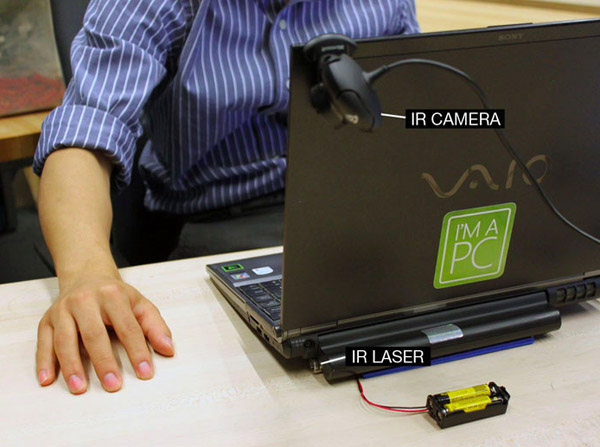 Using an IR laser, an IR camera and specialized software, Mouseless is able to interpret hand and finger movements. Basically, the laser illuminates parts of the hand that are touching the surface of the table. The camera tracks those illuminated parts, and the software sorts out what kind of commands are being sent, from simple movement to clicks to multi-touch gestures.

Mistry claims that their working prototype only cost them $20 to build, which means that this technology is very feasible. If Mouseless ever gets adopted, I hope that they come up with gestures that are less taxing. For example, instead of moving my hand around in a cupped position, I could just use one finger to move the mouse. Other than that, it’s perfect: we’ll have one less gadget to buy, to carry, to charge or buy batteries for. That not only means savings, it also means less waste.

[via Pranav Mistry via Gajitz]