Asetek Liquid Cooled All-in-One Pc: Cool Inside and Out

All-in-one PCs look nice and simple to set up, but they don’t appeal to hardcore computer users because these people know that it’s the insides that count, and PCs with slim form factors generally don’t have top of the line CPUs and GPUs because of the lack of airflow inside their cramped spaces. Until now, that is. Asetek claims that they’ve come up with a PC that combines the best of both worlds – a slim computer with drool-worthy guts, in this case a 130W Intel Core i7-920 desktop processor and a 75W nVidia GTX280M graphics card. 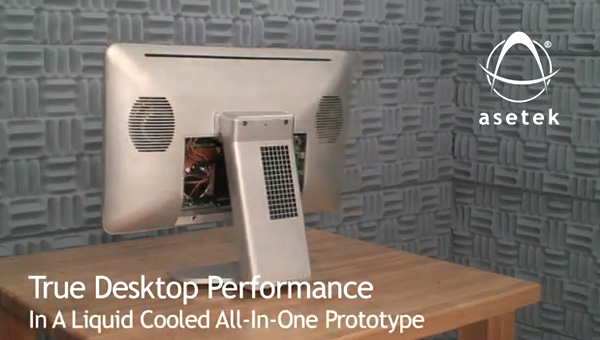 Installed in the stand of Asetek’s prototype is a high performance radiator coupled with a low profile fan. The coolant is distributed to cold plates attached to the GPU and CPU via a pump. Also, Asetek would like us to know that these parts are all high performance or low profile or both, as explained by Thermal Engineer Todd:

Ah, the old lab coat-wearing expert; why won’t you go away? No word yet on when the PC will be finalized, but I’m pretty sure this one won’t be cheap. That, and the fact that some PC enthusiasts actually enjoy customizing their rig means that this will have a limited appeal, but it’ll still find a home with well-moneyed folks, savvy graphics people, and hardcore gamers who don’t care about constantly upgrading their systems.