The latest Linux-based portable gaming console from Gamepark Holdings (the same guys who created the GP2X Wiz) has the unfortunate name “Caanoo”, which is not only difficult to spell, I have no idea how to pronounce it. Regardless, as a fan of handheld emulators like the Dingoo and The Wiz, I am curious about checking out the Caanoo. 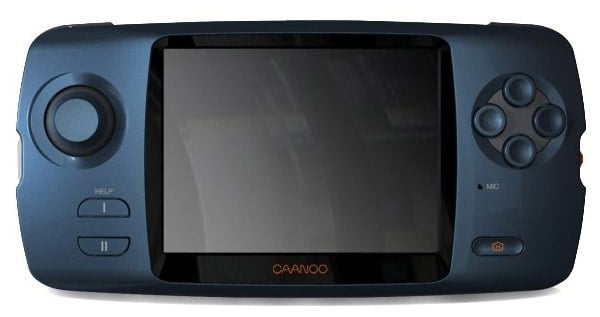 Here’s a quick rundown on the specs for the Caanoo, courtesy of the guys at MaxConsole:

While it’s not going to trounce the technology found in today’s higher-end smartphones, I’m happy to see that the Caanoo has a reasonably fast CPU and a dedicated 3D GPU, something not commonly found in handheld Linux devices. The built-in Wi-Fi is a nice touch too. (It turns out that the Wi-Fi requires a USB dongle, boo.) That said, I am concerned that they’ve moved from a digital control pad to an analog stick – which won’t be great for playing old arcade games.

Here’s a brief video from Gamepark, showing off some of the console’s more prominent features – along with Engrish translations like the tagline “The Extream Handheld Online Game Console”.

And here’s another clip where you can see the Caanoo playing OutRun on MAME4ALL, and using its motion sensors to steer the car.

Yeah, not all that exciting. Still, it might give my 2 year-old Dingoo (which also has a weird name) a run for its money. If you’d like to upgrade your Dingoo to a Caanoo, you can pre-order one over at Play-Asia for $149.90 (USD) now. They ship this August.