If you like toys that can put an eye out and singe the butt hairs of the neighbor’s dog as it tries to drop a load in your yard, you probably remember that Wicked Lasers Spyder III laser I talked about a few weeks ago. The thing reminded me and many other folks of a lightsaber and I guess that pissed George Lucas off. 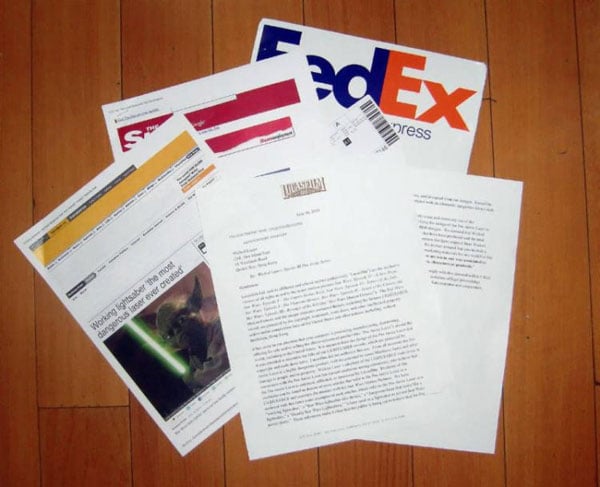 As a result, Lucasfilm sent Wicked Lasers a cease and desist letter demanding that the laser get a disclaimer that it wasn’t associated with Lucasfilm or Star Wars along with some printed clippings of stories printed online that called the thing a lightsaber. Apparently, the legal battle is now raging and Lucasfilm wants the thing off the market.

Wicked Lasers is offering the real cease and desist letter on eBay in an auction that will get the winner the full packet from Lucasfilm that we shall refer to as the packet of douchebaggery. Bidding is up to $355 last I checked, and that letter would be great mounted in a holder with the laser below it. Wicked Lasers people reading this: send me one of these lasers and a pic of our pal George. I’d like to burn “douche” into his picture using it while dressed like Jar Jar Binks – simultaneously showing off two of the dumbest things to ever happen in the Star Wars universe, me-sa thinks.