iPhone 4 Antenna Decal: It’s Not a Bug, It’s a Feature

Aside from FaceTime, the Retina Display and the revolutionary paradigm-shifting flawlessly perfect antenna, a select few iPhone owners also get access to one more new feature: a dedicated, touch-sensitive End Call button. Apple just forgot to label it, but that’s easy to remedy: 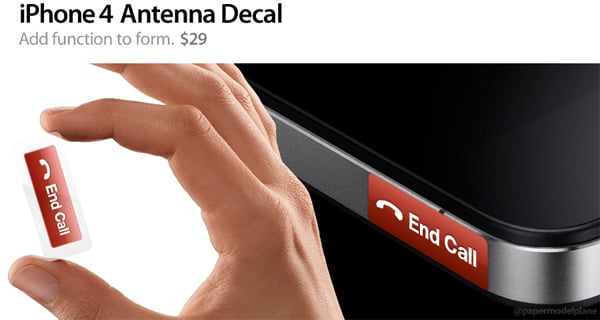 Like the antenn-aid, this decal started out as a prank, but now that people are clamoring for a real one, creator Aaron Draczynski is working on making it real. So that’s two new products created thanks to Apple’s new feature. More people given an additional means of earning a living. That’s just Magical. Revolutionary. Thanks Apple.

UPDATE: And sure enough, Engadget reports that the decal is now for sale on Etsy for $4 (USD) for a set of four.