Similar to the HoloAD trapezoidal display that we saw at CES, Aircord Labs’ N-3D uses a specially-coated transparent glass pyramid to give the viewer the illusion of a 3D display. An iPad placed on top of the pyramid projects three separate images, and each image is reflected in varying intensities on each of the three exposed sides of the pyramid, so that when you go around and look at the other sides, it’s like you’re viewing the other sides of the object being displayed as well. 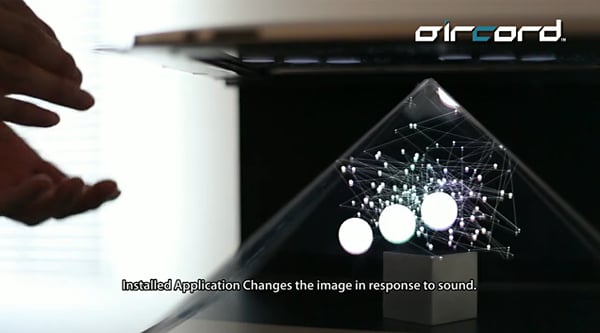 As shown in the picture above, the N-3D can also produce images that change in response to sound. I’m not sure what the practical applications of that are, perhaps this is merely proof of concept regarding its interactive potential. I’d be more stoked if it responded to touch though.