I was all ready to make fun of these Mini Bear Speakers from Juicy Couture when my wife and 5-year-old daughter walked in. The wife got all excited because they are from a designer and my daughter was all giddy because they were pink, they were stuffed bears, and they will connect to “daddy’s big iPhone” otherwise known as the iPad she runs off with at every chance. 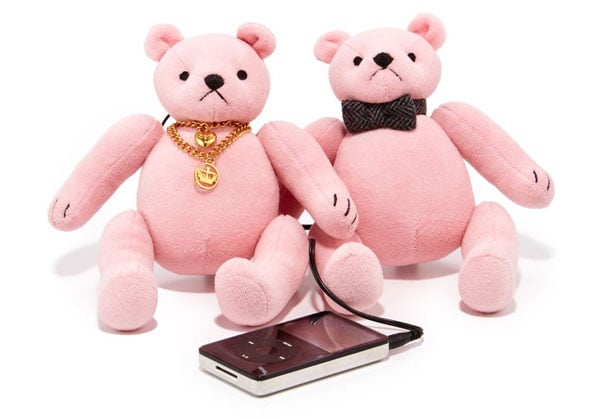 As a guy who won’t wear pink and thinks bears are imagery best left to a football team the Cowboys hopefully destroy, I didn’t see the target market. I do now see the market, it’s guys unlucky enough to run across these with a female in the room who can make puppy dog eyes. I will end up having to buy these damn things. I really need a lock for the office door.

If you are being forced to buy your own set, or happen to be a 5-year-old looking for something to hook to your “big iPhone” these might do it for you too. The things can be pre-ordered for $68 and will ship on August 20. The bears each have their own speaker inside and ship with a black cable for plugging in your stuff.