Japanese inventor Masuyuki Naruse believes that the current two-pedal system for braking and accelerating in vehicles is “dangerously flawed”. His point is that in situations when quick reactions are needed, sometimes people panic and press down on the gas pedal instead of the brakes, or sometimes press down both. He himself was almost involved in an accident because he hit the gas pedal instead of the brakes. So he invented a modified pedal, where the motion needed to brake is different from the one used to accelerate. 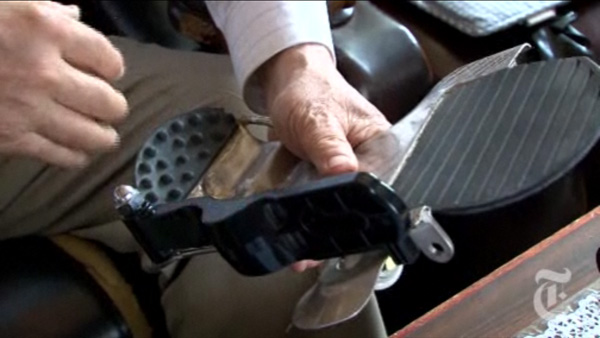 That’s the aptly named Naruse pedal in the picture. Using this pedal, drivers still press down to brake, but in order to accelerate they have to push the lever on the right of the pedal to the side.

It’s not complicated at all, but it will definitely take some getting used too, especially if you’ve been driving for years. Naruse says that it costs about ¥100,000 (about $1,156 USD) to retrofit a car with the pedal. He’s tried to contact Toyota to present his pedal, and possibly have it installed by default in new cars, but so far they have not responded to his request. What do you guys think? Is the Naruse pedal a good alternative to the current set up?

[via New York Times via Neatorama]