In the world of Sanctuary, after every battle, whether it be against lowly Fallen or the Lord of Terror himself, you will find that warriors will pause, they will just stand there in the middle of the bloodbath. Some take but a second, others longer, but this post-battle ritual is always observed, their brows furrowed by worry and focus. No, these fighters, each with weapons and skills that can wipe out battalions, are not praying for the souls of the vanquished. The warriors of Sanctuary pause after every battle to sort out the freaking inventory, with its abysmal interface and all too limited space, while all around them the ground is littered with gleaming items with their colored names, taunting the warrior, until at last they concede: “I can’t carry anymore.” The sadistic geniuses at Smasch Inc. saw it fit to share the nightmarish task with the rest of the world with Diablo Tetris. 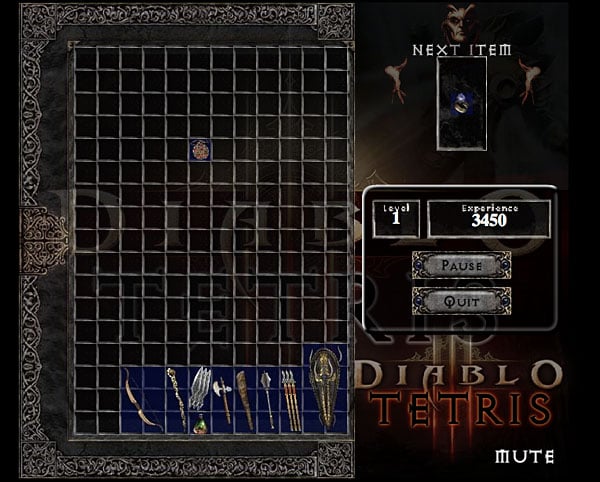 At first it may seem that the game is easy, because you usually don’t have to rotate the items. But true to its roots, this game has diabolical rules. Are you brave (or bored) enough?

Check out Diablo Tetris at XY Games. You can even download the game – if you hate yourself that much. And to Blizzard – I know you guys are busy coming up with new awesome stuff like the Monk and the Wizard, but please assign some of your best employees to come up with a better inventory system for Diablo III.