I think it’s safe to say that every year since 1997 there’s at least one customary rumor or update about Duke Nukem Forever. First it was out of anticipation but nowadays it’s probably become tradition. I guess that time of the year has arrived. George Broussard, co-creator of Duke Nukem, has reminded us of the existence of the Loch Ness Monster of video games. The 3D Realms designer was interviewed way back in 2006, and when asked the inevitable question, he said, “I think it’ll be out when pigs fly.” A pretty bland response to say the least. Fast forward to Sept. 1, 2010: Broussard shares a link to this picture: 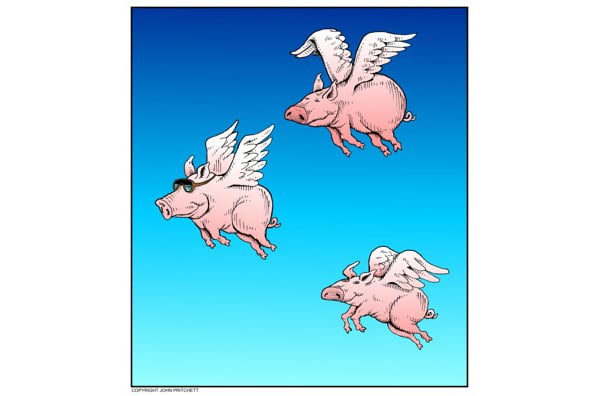 Looking at Broussard’s recent tweets, there seems to be no context for this picture. So it could be that a) Broussard just wanted to share a picture of flying pigs, b) he’s working on a game that involves flying pigs, c) he remembered what he said back in 2006, decided, whelp, it’s that time of the year, time to yank some chains, and posted the picture, or d) DNF is going to be released. This has to be the most ridiculous unofficial proof of a game’s existence. But not as ridiculous as this game’s development time.