If you live near Bob Davis, before you get out of your house listen closely for machines charging up, tin cans being crushed, or for this weird alien whistling noise. If you hear any of the three, it’s not safe to go outside – Bob Davis must be out playing with his 2,000v washer launcher, and he could very well hurt you. Or himself. 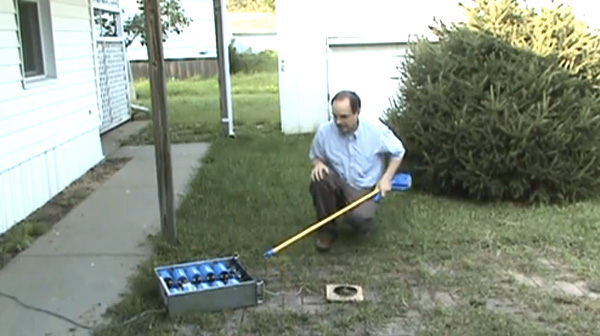 That’s probably the best screenshot I’ve taken in my entire life. The man holding the broom is Bob Davis. The box on the right is his washer launcher, fitted with ten of the biggest capacitors I have ever seen. To the right of the box is the “washer”, which is actually a hard drive platter, sitting on top of the launcher’s electrical coils. The broom is the extent of Davis’ safety protocol. If you don’t care for the hows and whys, the launcher does its thing around 3:15, 4:35 and 5:45.

As the commenters at Hacked Gadgets have mentioned, the sound the washer makes as it is launched is freakin’ awesome. I hope Mr. Davis comes up with a backpack version of the launcher. Also I hope that he stop underestimating the destructive capability of his toy. He says in his blog, “Not included in the video is another free launch where I lost the washer.  It was found later over 100 feet away on the far side of the house.” Oookay. Neighbors, you have been warned.