Modder Vomitsaw had a cheap wooden end table and a old Super Nintendo lying around, so he put together this awesome mod he’s donating to the office break room. 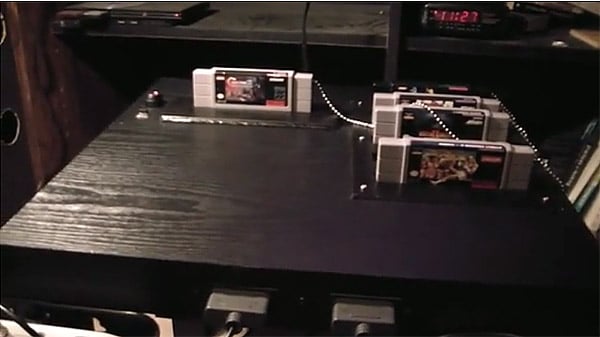 The Super Nintable has a neatly-integrated SNES under the hood, with the cartridge port set nicely into the top of the table, and two controller ports in the front. The power cord and video cables emerge neatly out of the back edge of the table. Here’s a video clip of the table in “action”…

Action packed, eh? I really like the slots for holding on to the cartridges, along with the metal chains to keep people from stealing the carts like the security system they use for ballpoint pens at the bank or the post office.

The only other thing I’d like to see is an LCD screen built into the surface of the Super Nintable so it could be completely self-contained.