Gamers: Digital Downloads Are Here to Stay, for Better or for Worse

I’m sure this fact is painfully obvious for a lot of gamers, but in case you’re one of the people who look down on DLC and digital downloads, here’s a very convincing, albeit long-winded argument from former Rock Band 3 lead designer Dan Teasdale. To sum it up, Teasdale says that weak retail sales for games is only one side of the story, because the video game industry is now making a significant amount money in digital downloads, the same way the music industry has shifted to digital downloads. 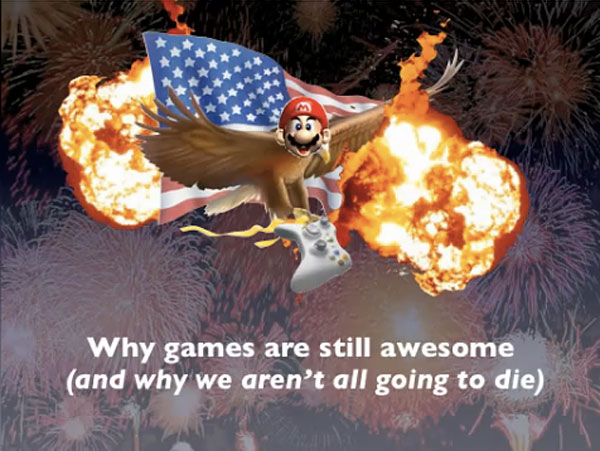 That’s the title of Teasdale’s presentation, which by the way he delivered at an International Game Developers’ Association (IGDA) meeting last week. So when he said “we aren’t all going to die”, he’s talking about game developers. The rest of us are still definitely going to die. Below is Teasdale’s presentation. It’s a shame it’s filled with adult language, because his message should also be heard by gamers and “market analysts” alike.

Yes! America! That’s all well and good for developers, but what this does mean for us gamers? For me, this is yet another sign for us to accept digital downloads as being a significant part of gaming experience, whether we like it or not. Personally I’d rather have a physical copy of my games, and I get depressed thinking of downloading tens of gigabytes with my current Internet connection. I’m also concerned with how publishers will handle ownership of digital games in the future, if and when it becomes the main method of distribution. But my main concern is that if the future of games becomes download only, people like me who have slow Internet connections will be left out even though we have the money to pay for the games. It’s like if the road from my house to the game store suddenly became a factor in my being able to purchase games.

Digital downloads may have many benefits for developers – it combats piracy and eliminates used game sales, costs less to distribute games and it offers a continuous stream of revenue and an opportunity to increase customer loyalty with DLC – I’m just not sure how it will play out for us gamers.