R2-D2 Robot Costume Holds a Dude and Moves Around

Not too long ago I mentioned that a dude had created the coolest Halloween costume ever and it was a life size power loader from Aliens the movie. That thing was epic and today we have another epic DIY costume created by a guy that is a large version of R2D2. 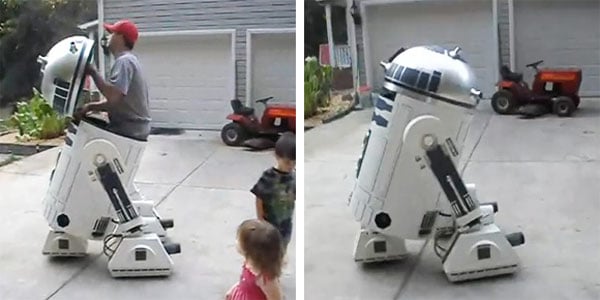 The thing is larger than the ‘bot from the flicks because a normal-size guy can actually climb inside of it and drive it around. There are few details about the robot other than its made from a plastic drum, has sound effects, a rotating dome, and fans to keep the guy cool inside.

I want to know how it’s controlled and how exactly he built the thing. You can see a video of it in action below, my favorite part is the little girl. I don’t think she is sure if R2-D2 ate daddy or not.