I am a huge fan of the tiny wearable camcorders that GoPro offers. I have one of their small GoPro Motorsports Hero HD camcorders that I use for car reviews and the thing is great. It’s tiny, has long battery life, records high-resolution video and has great mounting options. 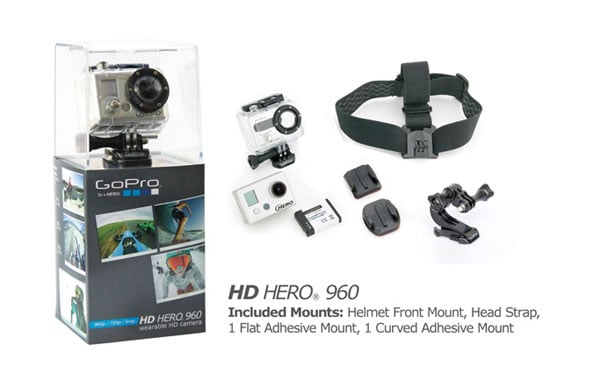 The downside to that camera and the others on the market is that they are expensive with the high-end offerings at nearly $300. GoPro has unveiled a new cheaper camcorder called the HD Hero 960. The camera maxes out at a resolution of 1280 x 960 and supports 720p HD whereas the other cams from GoPro do 1080 – but it will save you some money.

The 960 can also shoot still photos and has a waterproof case. The camera ships with a head mount that will also work for helmet recording. GoPro also ships it with a curved adhesive surface mount and a flat surface mount as well. One other item of note: the 960 lacks the expansion port the higher-end cameras offer so the LCD back or extra battery pack that are available will not work with it.