I always get a kick out of companies that realize they can’t defend themselves in court and end up settling without admitting guilt. If they weren’t guilty, I hardly think most companies would offer to pay out. NVIDIA has been fighting a class action over allegedly defective MCPs and GPUs in notebook computers for years now. 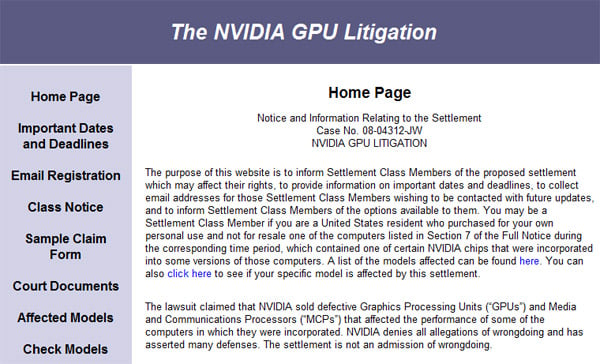 The issues happened in 2008 and 2009 with notebooks from Dell, HP, and Apple having various issues that were to do with faulty NVIDIA hardware inside. NVIDIA has been fighting to prove its hardware was not at fault and has finally thrown in the towel.

NVIDIA has now agreed to a settlement, yet still admits no wrong in the case. The settlement will see HP notebook owners with affected machines getting replacement notebooks. Apple and Dell owners will get new GPUs. Owners of machines from any company that paid to have the machine fixed may get as much as $2,000.