The guys at 1 Block Off the Grid needed a high-end Mac to run Adobe After Effects, but instead of buying an expensive Mac Pro, they decided to build their own computer. Normally that would be nothing to write home about, but the 1BOG staff really put the hack in Hackintosh. Here’s their computer: 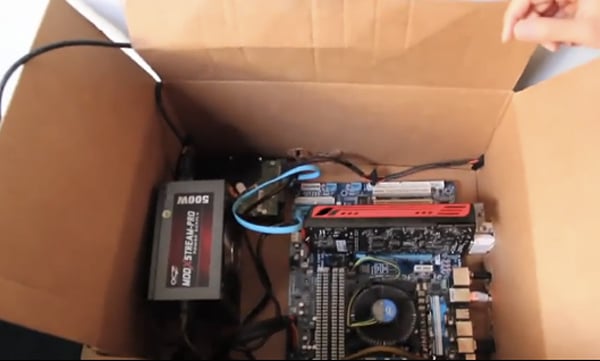 The total cost? A little more than $800 (USD) in parts, a far cry from the $2500 price of the cheapest Mac Pro available. $2000 iMac, which as it is has a weaker graphics card, but a slightly better processor. The iMac also comes with a pretty (and pretty huge) 27-in screen, but I don’t think that’s worth $1200. Plus you can draw on the Mac-in-the-box case! Check out the 1BOG blog for more info on how they built the cardboard Hackintosh.