Fujitsu Robot Teddy Bear is Ready to Creep Everyone Out

Straight out of Steven Spielberg’s AI, Fujitsu has just unveiled its newest robot: a social robot teddy bear. What can it do? Probably a whole lot and guess what, it speaks Japanese! 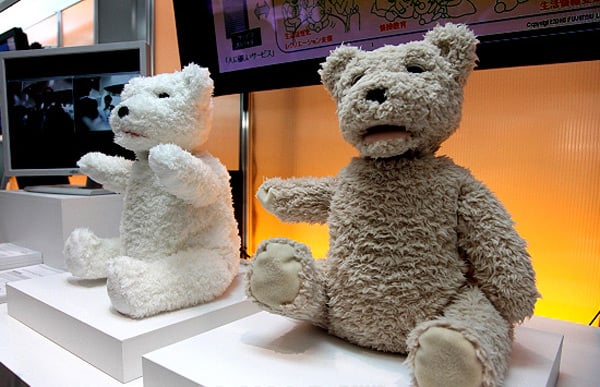 This robot is supposed to respond to human interactions thanks to a set of 300 pre-programmed physical and audio reactions. It’s got a camera in its nose so that it can recognize facial expressions and gestures. Apparently, they want to place this robot in nursing homes so that it can provide some digital companionship.

I don’t know. 300 interactions doesn’t sound like much, but I’m sure that it will keep the kids pretty happy for a while. As long as it doesn’t “learn” I think I’m fine with it.

Fujitsu has just taken the wraps off its latest robotic wonder, a “social robot” bear that is probably the closest we’ve ever come in reality to that adorably grumpy robot pal from Spielberg’s movie “A.I.”

The robot can respond to human interactions with a set of 300 pre-programmed physical and audio reactions. Equipped with a camera in its nose for face and gesture recognition, Fujitsu hopes to place the robot in nursing homes as an interactive comfort aid. You can see video of the still unnamed robot bear in action above.