Remember that guy who made that duct tape AT-AT? Well, he’s just listed another Star Wars item. This new listing is for a Millennium Falcon that’s made out of cardboard, Styrofoam, and aluminum tape. That makes it all shiny.

This new eBay listing was also made by Komanac for the local art show, Star Wars 33 & 1/3 Anniversary. It’s pretty large, at roughly 24 inches wide, 36 inches long, and 5 inches tall. It weighs somewhere around 4 to 6 pounds. 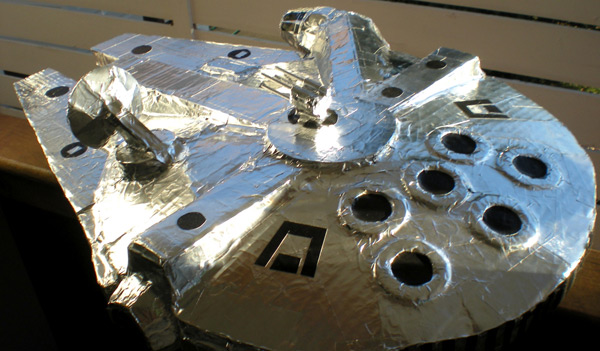 The aluminum Millennium Falcon has a starting bid of $200 bucks, and nobody has bid on it yet. Shipping this thing is significantly less that what I saw for the AT-AT. Plus, it’s guaranteed to make the Kessel Run in over 12 parsecs.

[via Boing Boing via Make:]