Andrew Sneath has invented a vehicle that allows people who know nothing about diving or swimming to safely experience the joys of being underwater, albeit in a controlled environment and with a slight dent to one’s dignity. The vehicle is called the HydroBOB (BOB stands for Breathing Observation Bubble), a scooter with an oxygen tank and a large viewing bubble with a 180º view. 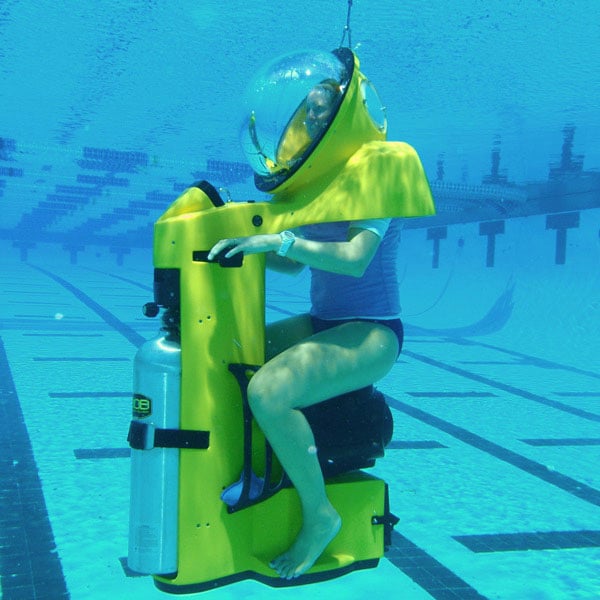 Even though it looks like a scooter, seeing the HydroBOB in action reminds me of a bumper car. There are triggers on the handles that lets you control the thrust, but it glides around clumsily and slowly. As you can see in the picture above, the HydroBOB is also tethered to a support structure above the water, so there’s probably a limit to how far it can go. But it is a lot safer for the HydroBOB to be slow and tethered, especially if a non-diver is riding it.

You can try out the HydroBOB at the Hyrdodome in Fort Lauderdale, Florida for $25 (USD) per hour. You’ll also see Sneath’s FISH-E 101 robot fishes while you’re scooting underwater. You can also rent the HydroBOB for private events. Check out their website for more pics and info.