If you go waaaaay back in the wayback machine to 1975, you might remember a little computer called the Altair 8800. Officially, it was the “world’s first personal computer,” running a speedy 8080 processor which could make the red lights on the front blink in and out of sequence among other things. Feeling nostalgic about the old $440 Altair he couldn’t afford back in the day, modder Bob Alexander decided to build a modern PC, inspired by the classic 8800. 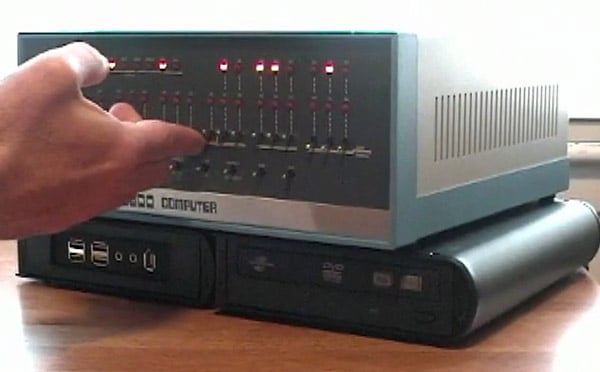 His mini 8800 PC mod is actually based on the same sort of case that the much smaller Altair 680 came in. With his 11″x”11″x4-3/4″ case in hand, Bob set about gutting it and figuring out what sort of PC he could fit inside. Ultimately, he settled on a Mini-ITX mobo, complete with a speedy Core i5-660 CPU, running at 3.33GHZ, along with 4GB of RAM, a 500GB hard drive and an 80GB solid-state drive. In the interest of keeping things small and tidy, he stuck the DVD drive and front ports in those external boxes underneath the mini PC.

Bob made a custom front panel and circuit board, wired to a microcontroller board to interface with the Windows 7 PC under the hood. And using the Altair 32 emulation program, he can run all the old Altair programs and make the lights and switches on the front work just like the original. Brilliant. Here’s a video of the mini Altair 8800 in action:

Check out more of the Mini Altair 8800 PC over at Galactic Studios.