Dude Gets Stuck in Toilet Trying to Save Mobile Phone

I have had some really shitty days in my time, but one dude in China has given new meaning to the term. As the story goes, the guy was in the crapper, drops his phone down the toilet, and then rams his hand not just into the water, but down the damn poop chute of the toilet. 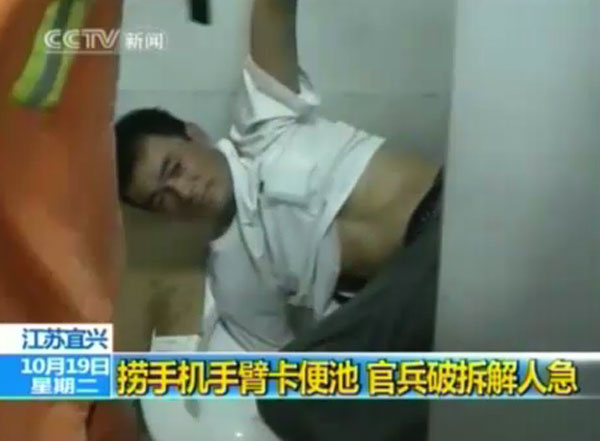 What I want to know is with his phone in the sewer and his arm stuck up to the elbow in the pot just how the hell did the fire department get involved. Talk about a crap job removing this moron from the toilet. I particularly like the part of the video where the firemen are gloving up, you can see one of the guys shake his head and if I could understand Chinese I bet he is saying “WTF, I don’t get paid enough for this.”

He was apparently stuck for only a short time and his rescue required the use of a crow bar. I wonder if it was a public toilet, it kind of looks that way. I bet the person who found the guy stuck like that laughed and pointed for a few minutes before calling for help.