The robots are getting shrewder every day. Recently, they sent an emissary to Shimura Zoo to test how fleshy penguins will react to their synthetic equivalent. To increase the robot’s chances of a warm reception, the robot arrived smoking a pipe. Classy. 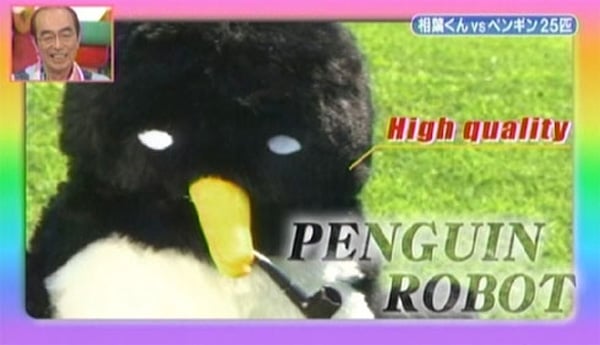 Actually, this “high quality” robot is barely more than a remote-controlled car with a penguin stuff toy on top. The stunt was pulled off by Masaki Aiba, one of the hosts of Japanese variety show Tensai Shimura Dōbutsuen (Genius! Shimura Zoo). Watch as the local populace easily falls for the charms of the robopenguin:

When it comes to penguins, “something fishy is going on” is a positive idiom.

[via Japan Probe via Topless Robot]