I actually was pretty decent bowler when I was a kid, but on the rare occasion that I go bowling these days, I usually get a score that I’d rather have for my golf game. It would be cool to have have one of these robotic bowling machines to bring to the alley, so I could still beat my friends on a consistent basis. 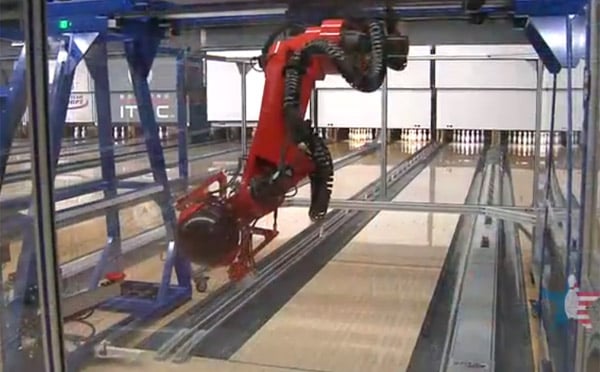 EARL, the Enhanced Automated Robotic Launcher is, according to this video clip, “the single greatest piece of bowling technology known to man.” Hmmm. I thought the ball was the single greatest, followed closely by the pin.

As you can see, EARL takes on PGA bowler Chris Barnes, and manages to hold his own for the most part. However, EARL’s perfection is ultimately its Achilles’ heel. Since humans can make tiny corrections to make sure they’re not wearing down the same spot in the alley over and over again, Barnes manages to beat EARL by a score of 259 to 209. Still, that’s about double a “really good” game for me.

My favorite part of the video is where Barnes says (referring to EARL,) “the capabilities are fairly limitless.” Really? What else can this bowling ball-throwing robot do? Cure cancer? Turn around the economy? Eh, at least it can get a Turkey. That’s way more than I can pull off.