I am old enough now to admit that Sesame Street creeped me out as a kid. I don’t want some grumpy, green monster living in my trashcan or a giant yellow bird dropping by to play. Back in my day, Elmo was not the favorite, I was more a Cookie Monster kid myself. Wanting to eat cookies all day, I could identify with. 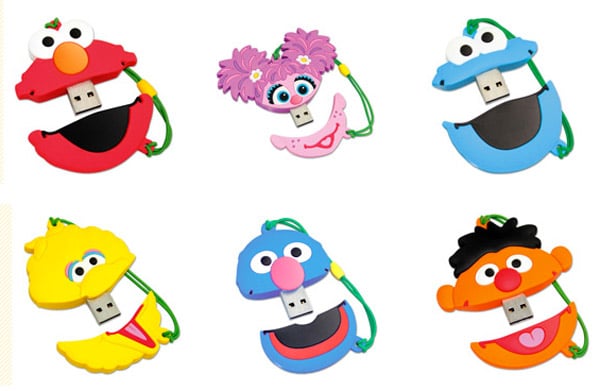 If you have kids or if you are just weird and still like to watch Sesame Street, (that Katy Perry video doesn’t count as weird for the record) you can get your hands on some new Sesame Street character flash drives from ATP. The drives cost about $25 (USD) each and look like the face of the character on the video.

Each of them has a wearable cord, which appears to make them like a bracelet for kids. There are seven flash drives in all with versions for Elmo, Cooke Monster, Ernie, Abby, Big Bird, and Grover. One of them is just the Sesame Street logo and has more than one character on it. Each has a full-length video installed and has enough space for 400 photos on the drive.

They’re available now over at the Sesame Street Store.