I’ve been thinking about computer interfaces for a while, and I was pleasantly surprised that Microsoft is embracing the hacking of the Kinect, instead of shunning it. The latest hack includes using the Kinect as an interface for your computer. Think about it, you could do air swipes and program complex gestures since the Kinect has so many IR spots to map what it sees. 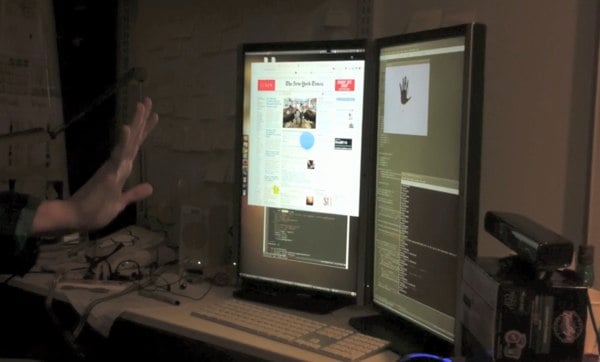 This hack comes courtesy of the MIT Media Lab Fluid Interfaces Group, and it allows them to use their Kinect as a gestural interface for browsing the web.

But the MIT guys aren’t the only gesture game in town. Evoluce‘s solution will support simultaneous multitouch and multiuser control of applications, which sounds pretty good to me. The video below showcases what Evoluce can do.

Frankly, I wasn’t that interested in the Kinect on the Xbox 360, but it if can be used in this fashion, I’ll buy one. It could potentially evolve into a multitouch remote control plugin for HTPCs and desktop computers.