This compact game console is a real freak of nature. Not only is it shaped like Sonic the Hedgehog’s spiky blue head, it plays some classic 16-bit SEGA Genesis games and comes with Wii-like motion controllers. 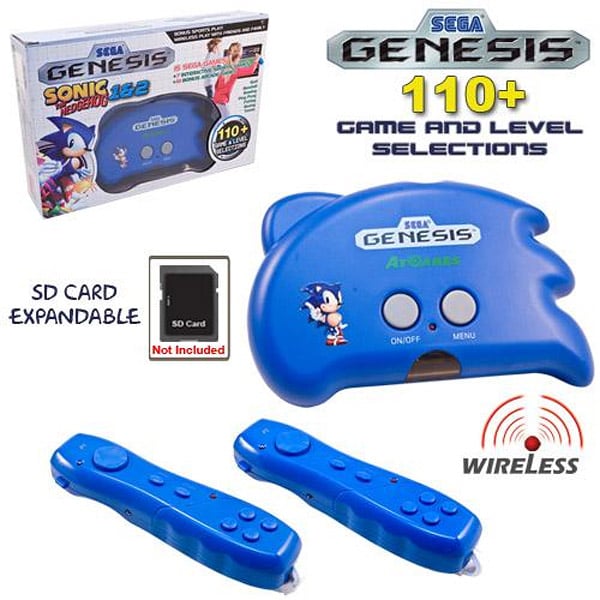 Despite the “110+” labeling, the system comes with a total of 40 games (the higher count includes all levels you can directly select). Included are 15 classic licensed games, 7 “interactive sports games”, and 18 “arcade games”. I found a full list of included titles here. The system ships with a pair of wireless controllers, which both appear to have a traditional D-pad (presumably for the classic Genesis titles), but also motion control (probably for the other titles). 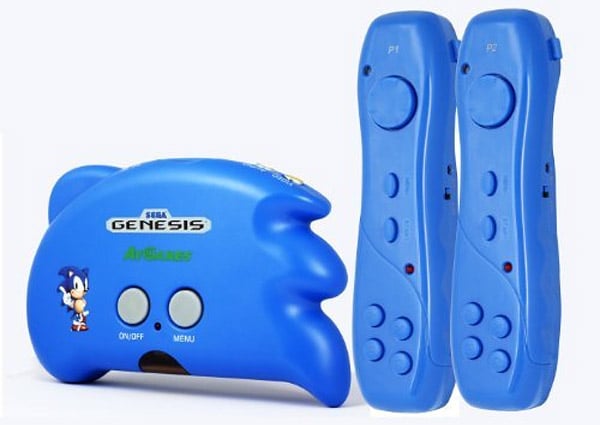 Perhaps the most intriguing part of this oddity is the SD card slot which lets you “easily expand your gaming library beyond the games built-into the system.” So far, the only downloadable games I could find are these lame looking ones. I’m not sure if you could use the SD slot to load up your own ROM on the thing, but for just $35 bucks, it might be worth a shot.

In my experience, previous SEGA Genesis products from ATGames have had issues with wonky sound emulation, so you should consider that before plunking down your money. Others over on the SEGA-16 Forums have stronger opinions than mine – like this guy: “You can get more accurately emulated Genesis hardware by slotting an original cart between your ass cheeks, then sitting down quickly onto it and screaming ‘SEEEEEGGAAAA'”. Okay, so maybe you shouldn’t buy one.

If you still want one, you can get your hands on the ATGames 110 Games Motion Control Sonic System over at DDR Game.