When I was a kid, me and a couple of my friends would sneak hairspray outside along with matches from my dad’s ash tray and spend some time having war with the little plastic army men complete with real flame throwers. I’m still not sure how I survived my youth. I would take those melted army men and bury them so my parents wouldn’t know that I was setting stuff on fire. 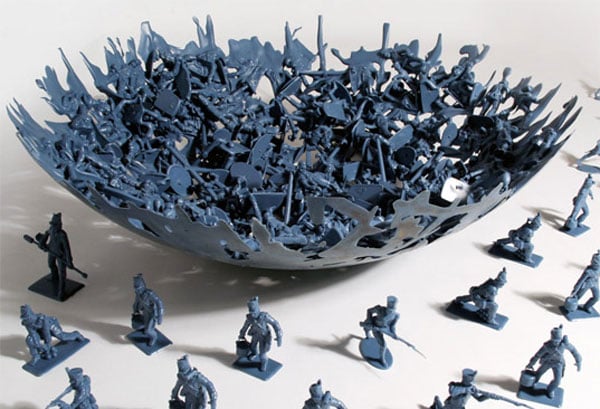 This cool bowl by Dominic Wilcox reminds me of those summer days setting stuff on fire in my backyard. The designer took a bunch of those plastic army men and melted them into the shape of a bowl. I use the term loosely since to qualify as a bowl in my opinion you have to be able to eat Lucky Charms out of it and this thing has holes all in it.

It looks to me like the dude who made the bowl just took the men, stuck them in a wok, and cooked them up a bit. The finished product would be a cool fruit bowl. The thing totally gives me a great idea of a holiday wreath made from all the toys my kids broke since last Christmas all melted together.