The first time I caught wind of the real TRON light cycles was back in June when they were on eBay for $35,000. I wanted one so bad but sadly, my lottery ticket didn’t win. If you have the loot to buy one, apparently a few of them are still available and rather than just offering up pics for you to lust after, Parker Brothers Choppers is giving us a video of one geek riding it to get worked up over. 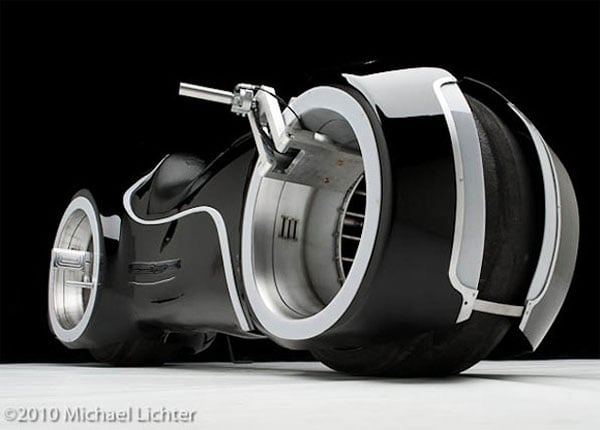 If you watch the video though, the music will piss you off. I really wanted to hear the thing, but the background music is too loud. With a V-Twin in the bike from a Suzuki TLR-1000 what I can hear of the bike, it doesn’t sound high tech enough for a light cycle. This thing needed a screaming, high-tech rice rocket motor.

It looks so epic, but it looks dangerous to ride. The bike is supposed to be street legal, but it appears to have very little steering and it looks like it would lever over if you lean at all. The bike weighs 474 pounds and is a bit over 100 inches long and 23-inches wide. There are four of the ten bikes built left and they are going for $55,000 each now.