Soundracer V12 Makes Your Putt-Mobile Sound Like a Ferrari

Is your car a beater? Do you drive one of those stupid little Smart cars? I bet you wish you had a V12 engine under the hood, don’t you. Well with this fun little contraption, you can’t have that, but you can at least make your car sound like a sports car. 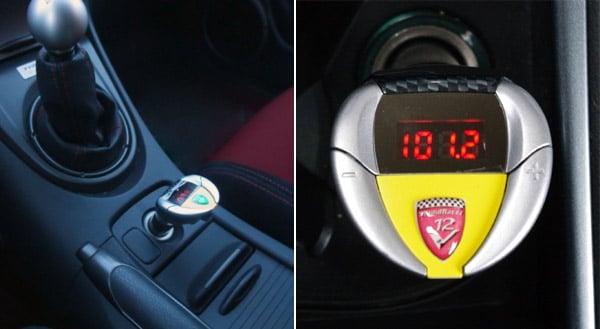 The SoundRacer V12 edition plugs into your car’s 12-volt outlet and emits revving sounds as you speed up and slow down. The gadget automatically detects your cars engine speed from electrical variances from your car’s alternator, and uses those impulses to match your driving with authentic sounds from a Ferrari V12. To be precise, the audio was recorded from a 1980 Ferrari 512BBLM, with a booming 500hp engine.

If you don’t believe me, check it out in action in the video below:

Pretty cool, no? To amp up the sounds, the SoundRacer transmits to your car’s radio via an open FM station. The only problem of course is that you can’t listen to the radio or your MP3 player while this thing is on, but you really want to listen to the roar of your new-found fake engine anyhow, don’t you?

You can grab the SoundRacer V12 from one of these online merchants for about $50 bucks. I can assure you that’s way cheaper than a Ferrari.

[Thanks for the tip, Justin!]